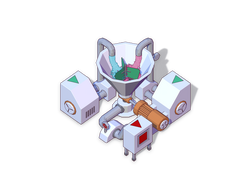 The Multimixer is one of the Machines in Big Pharma, and is one of two machines that can be used for adding catalysts to drugs to enable the production of higher-level cures.

The Multimixer combines 2 drugs together into a single drug.

The Multimixer is the most basic machine for combining effects of two drugs, and is thus usually the first mixing machine acquired. While it lacks some of the efficiency and flexibility of more advanced machines, its low acquisition and process costs make it an attractive alternative. Unlike most early processing machines, however, the Multimixer has a process time of 2 rather than 1, making it a natural bottleneck in the production process. Further complicating the matter is the configuration of the Multimixer's inputs: in order to feed the same inputs into two different Multimixers, it is necessary to cross belts at least once. While it is possible to cross belts and maintain correct feeding of drugs to their destinations, care must be taken to avoid jams.

Despite being an important machine, the Multimixer is prone to causing confusion. Errors made when loading or configuring the mixer result in undesired output, and the cause may not be readily apparent. The example below explains the mixing process for transferring a single effect, although the Multimixer can transfer more than one effect at a time.

In this example, Ingredient A is the base drug into which the Type 3 catalyst from Ingredient B (Urinary Retention side effect) must be added. However, Ingredient A has no free spaces; all four effects are populated. Ergo, a side effect needs to be removed.

Following the process to eliminate a removable side effect, the Prompts Fits side effect is removed from Ingredient A, freeing up Slot 4. The desired effect in Ingredient B is in Slot 4, so no changes need to be made to it.

Both ingredients go into the Multimixer. Note that one ingredient - in this case, Ingredient A - is marked with a blue line down its left side in the Multimixer control panel. The blue line indicates which drug is set as the base drug. This is the drug that will receive effects from the non-base drug. If the blue line is not next to the drug that is supposed to receive the effect, the Toggle Base button can be used to change the base drug setting.

The Urinary Retention/Catalyst effect in Slot 4 of Ingredient B is shifted into the blank Slot 4 in Ingredient A (since Ingredient A is set as the base drug. The other effects in the non-base drug (in this case, Ingredient B) are lost during the mixing process and cannot be recovered or used.

The combined result is ejected through the output port once a belt is connected. The output drug will be of the same concentration as the base drug prior to mixing.

Two other machines can be used for transferring effects into a drug.

While similar to the Multimixer in principle, the process is significantly different. Instead of moving an effect into a blank space, the centrifuge can be used to swap ingredients (half in the base machine, specific slots when upgraded). Furthermore, no effects are discarded; both drugs are output at the end of the process. See the centrifuge article for an explanation.

When only adding a booster to a drug, the Booster Mixer is an easier option than the Multimixer or Centrifuge. Any boosters present in the booster drug replace any existing effects in the base drug already in the slot(s) where the booster(s) are present. See the booster mixer article for an explanation.