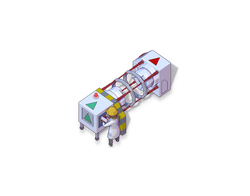 The Pill Printer is one of the Machines in Big Pharma. Pills are among the most common drug delivery methods in the world and take two forms: caplets and tablets. Caplets are formed from a shell, usually made from gelatin, that dissolves in the stomach to release a drug powder or granule. Tablets are produced by compressing a measure of powdered drug mixed with a binder; under pressure, the powder binds to itself and produces a solid pill which begins to dissolve immediately in the body.

The Pill Printer is the most basic drug maker. It's cheap, fast and has a small footprint.

However, despite these advantages, the Pill Printer has one important disadvantage. Unlike all other basic machines, the Pill Printer's process time is 2, meaning that it will create a bottleneck in the production process unless deployed in pairs. Additionally, as its output rate is high, especially when employed in multiples, it can overwhelm output belts and sockets, creating another bottleneck. The Packer is the solution to this problem.